The Boom Bap Project are a trio from Seattle, Washington consisting of Destro, Karim & DJ Tre. They’re also apart of the Oldominion collective, dropping their full-length debut Circumstance Dictates only 2 decades back & then the Rhymesayers-backed sophomore effort Reprogram to even more critical acclaim 4 years later. Last time we heard the crew together was in 2007 with The Countdown, but have decided to reunite from their long hiatus for a debut EP.

“Been So Long” is a lush opener talking about their hiatus whereas “Don’t Follow Me Down” enlists Wordsworth to talk about being steady on their own with a harp loop throughout. “Deion Sanders” goes into more chilled out territory talking about the golden era just before saying they’ll always kill it on the rugged “Rain or Shine”.

The song “Hagler vs. Hearns” showcases their chemistry proclaiming their music as the real shit with a woozy instrumental while the penultimate track “Achilles” has a bit of a soulful feel to it showing them they way they do shit. “Ink Drips” then finishes off the EP with an emotional piano ballad.

I’ve been a fan of these cats since the Rhymesayers days, so to hear them come back albeit in a short capacity makes me happy as Hell. The production stays true to their name all these years later & in terms of chemistry, they haven’t lost a single step. 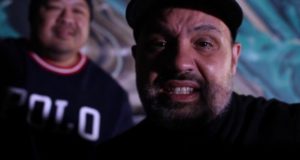