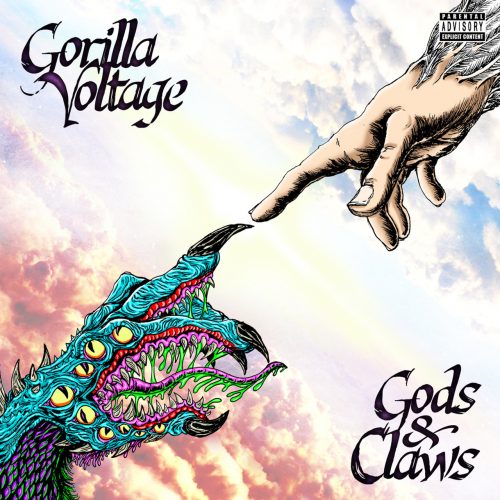 Gorilla Voltage is a hip hop duo from San Jose, California consisting of Mr. Grey & ClockworC. They originally came up as The Damn Dirty Apes in 2015 & released their self-titled debut that same year, but changed their name after signing to Majik Ninja Entertainment on Christmas Day that following year. Their sophomore album Ape-X was released a couple months later & now to kick off 2019, they’re delivering their 3rd full-length album.

The album kicks off with “Handful of Matches”, which talks about arson over a bass heavy beat. The next track “Ape Shit, Pt. 2” serves as a menacing sequel to a highlight off their 2015 debut while the song “Let Go” with Dot Bundini reflects on their past over a boom bap beat with some sinister horns. The track “Good Die Young” talks about how ruthless they are over a boom bap beat with some strings while the song “War Zone Dome” talks about internal conflict over a chaotic beat. The track “Generation Fool” is an adrenaline pumping take on rap metal while the song “Westilence” is filled with vicious battle bars over a Seven instrumental with a prominent tuba.

The track “Feeding Time” brags about them taking over the game over a sinister beat while the song “Rocks in My Socks” talks about drug dealing over a hyphy beat. The track “Spaz Out” is a flawless mosh pit anthem while the song “Doomsday” vividly describes an apocalypse over a booming instrumental with some 8-bit synths. The track “Mad Scientist” with Kung Fu Vampire is a lyrical onslaught over a thumping beat while the song “Pub Crawl” is a flawless display of the duo’s chemistry over a chaotic beat. The penultimate track “No Rivalry” tells the story of a robbery over a monstrous beat & then the closer “Hatefuck” is a beautifully slow, smooth & melodic love anthem.

At the end of the day, Gorilla Voltage really rings in the new year for MNE by delivering their best work yet. There are some weak spots here & there, but the production & lyricism have both stepped up for the most part & I also love how they take on many different styles of hip hop on here.