IAMGAWD is a 35 year old MC from Chicago, Illinois who first emerged last summer when he dropped his eponymous debut album produced entirely by Max Julian. However, I personally didn’t get put onto him until the big homie Mike Sears of the Speak Ya Clout Podcast recommended me his sophomore effort The Eternal Reflection in the spring of this year. I was very impressed with Custom Made’s production & the way IAMGAWD vividly portrayed the conditions of his hometown now, so to hear that he’s tapping in Doc da Mindbenda for a 3rd album had me excited to say the least.

The title track that opens up the album has a hypnotic vocal sample with IAMGAWD delivering some incredibly deep bars whereas “Dreadhead Zombies” takes an icy boom bap route perfectly painting a picture of his upbringings. “Gotham Gangways” melancholically toys with the concept of death just before “Blessings” is of course a more uptempo cut talking about his gratefulness.

Meanwhile on “Honor Me”, we have a more soulful instrumental as IAMGAWD asks for his flowers leading into H.H.W.N.D. (Hip Hop Will Never Die)” has a dustier beat talking about carrying the culture on. “Common Sense” works in an orchestral loop continuing to flex his prowess, but then “Do ‘Em Filthē” is a decent little 7 & a half minute posse cut.

“A Father’s Love” passionately reflects on growing up without a dad & being one himself while the song “Bulletproof Dreams” somberly reminds us we aren’t promised tomorrow. The penultimate track “Same Shit, Different Day” works in a flute with some dusty drums to tell us he ain’t what he used to be, but the closer “On My Soul” has a bit of an orchestral/jazzy vibe showcasing his hunger.

The Eternal Reflection is a tad bit better to me, but this is still an incredible follow-up nonetheless. Doc da Mindbenda cooks some of his best production to date with IAMGAWD’s lyricism becoming more & more intricate each time he drops. Whatever he does next, I’ll absolutely be on the lookout for it. 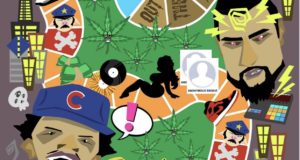