2 West Coast brothers of Mexican decent putting the flag on their back, there’s no denying Los Angeles’ very own Coyote are paving their own lane. Blood brothers Guapo, and Ricky Blanco for the past few years been consistently dropping singles alongside viral social media content. The anticipated wait for an actual project is now over with the release of their full-length debut album this weekend, “Thicker Than Water“, accompanied with the official video for their lead single “Out The Mud” featuring Symba. 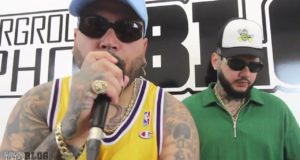