MC Ren is a 52 year old MC, songwriter & producer from Compton, California who got his start when Eazy-E signed him to Ruthless Records as a solo act in 1987 & enlisted him to write half of his full-length debut Eazy-Duz-It. This resulted in him joining N.W.A & they went on to become one of the most impactful groups in hip hop history even to this day. But it wouldn’t be until the summer of ‘92 where he started building a solo career for himself with the debut EP Kizz My Black Azz & has since dropped 4 albums of his own, with the last being Renicarnated a little over a decade ago at this point. However, Ren is returning after 13 years & has enlisted Tha Chill of Compton’s Most Wanted to fully produce his 2nd EP.

After the intro, “Keep It Gangsta” sets it off with Ren admitting he’s feeling like Roy Jones Jr. on top of an instrumental giving off a vintage west coast flare to it whereas the title track goes into more trap territory sampling the classic Raekwon joint “Ice Cream” talking about him just chilling. Kurupt tags along for the minimally produced “Fire” getting in their battle rap bag just before “The News” takes a soulful route with socially conscious lyricism. The song song “Time” is a cool reflection on the old days over a slick instrumental while the penultimate “Hub City Love” with Tha Chill finds the pair over some pianos paying tribute to their old stomping grounds. “The Anthem” ends the EP with a gritty ass posse cut accompanied by the likes of Cold 187um, J-D, Jayo Felony, Ras Kass & of course Tha Chill.

Ren has always been one of the most underappreciated forces behind N.W.A in my opinion & Osiris continues to show that because I think this is not only a great comeback from the Villain himself, but it’s also the best solo effort he’s made since Ruthless for Life. It makes me really happy to hear that him passionate on the mic again & Tha Chill’s production is incredibly consistent as well. 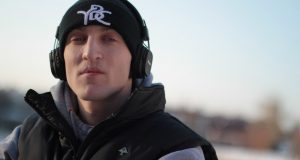