Marcus Hancock p.k.a. Soncier “The Hero of Hip Hop” is an American rap artist and music mogul from the DC/Maryland area known for his very blunt, witty, confident and controversial lyrics and showmanship. Soncier was in Fort Bragg, North Carolina in 1987, but spent his childhood between Cincinnati, Ohio and the Washington, DC/Southern Maryland areas. At an early age, Soncier displayed artistic talent and grew interested in becoming a cartoon illustrator. He began his musical quest at the tender age of 11 once his family settled in Prince Georges County, MD in 1998; but it wasn’t until 2006 that he started taking rapping seriously.

Upon the release of his first album As Real As It Gets in 2006, Soncier quickly began to gain a fan base amongst his peers around the DC/ Maryland /Virginia area known as the “DMV.” He has performed all over the DMV area, frequenting talent showcases, local colleges, open mics and nightclubs. His second album, The Big Boom was ranked in the top 20 on MTV’s Ourstage competition for break-out DC artist. In 2009, Soncier became the co-founder and Vice President of TT Hanco Records, an independent recording label aimed at promoting and cultivating musical acts in the DMV area. A year later, he signed a digital distribution deal with Def Jam Recordings through iTunes and Tune Core. In addition, Soncier’s 2010 single, “How You Do Dat Dat” received radio play on WKYS 93.9 and his 2012 single “All That” was featured on Shade 45, hosted by MTV personality, Sway. With six years under his belt as an inde- pendent artist, Soncier is ready to take it the next level.

Soncier releases his highly anticipated Mixtape D.A.R.E (dangerously anxious real edgy) screaming f*ck Negative sh*t, Soncier becomes the positive rapper with a negative approach. This is definitely a must have 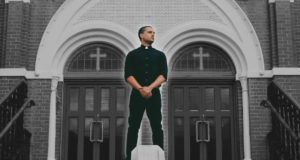