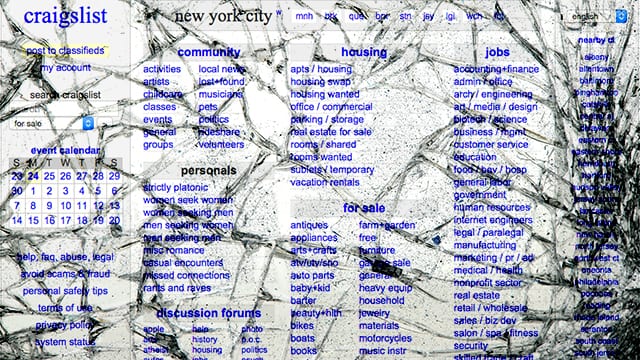 According to Craigslist CEO Jim Buckmaster, Craigslist domain service records suggest that one of their registrars was compromised and hacked. Because of this, Craigslist is not showing up on browswers, and/or visitors are getting redirected. People visiting Craigslist.org were redirected to a variety of webpages, one of which was DigitalGangster dot com, which also crashed as well. This webpage belongs to a rapper by the name of YTCracker.

YTCracker was a 17-year-old high school student, and already a surprisingly adept at breaking into supposedly secure web servers. It was the 23rd of November (one year ago yesterday) that Wired published an article on YTCracker’s hacks into NASA’s Goddard Flight Center international homepage, the Bureau of Land Management’s National Training Center homepage, and the Defense Contracts Audit Agency homepage.

Now Craigslist has been hacked. Not necessarily by YTCracker, but by someone who wanted to point back to his webpage nonetheless.  The hacker used a technique called DNS hijacking which gives them control over a domain without actually requiring them to hack into the website. In effect, you could hijack CIA.gov to redirect to that silly half-finished rap video, but Craigslist.org gets much, much more traffic. According to Quantcast, it’s currently the 29th largest website in the United States.

We may never know the full story behind the massive Craigslist breach. It sounds like YTCracker had something to do with it, even if he simply served as the inspiration. And in a backwards kind of way, the inspiration holds up. Massive websites, including important ones, continue to fail at securing their online security.