Before they’re heading to Europe, the three assassins are dropping a brand new visual for “Angels Come Calling” (performed by B-Real and Demrick and prod. By DJ Khalil). The video was shot at the recent Cannabis Cup in San Bernardino, where B-Real was crowned “Stoner Of The Year” as well as during the most anticipated High Times Magazine cover, for which B-Real will be posing with Snoop, Method Man and Redman.

Xzibit, B-Real & Demrick Embarks On A European Tour For Their Serial Killers Project

Mind Blowing Productions announce “The Serial Killers Tour” featuring legends: Xzibit, B-Real and their partner in crime Demrick. Together they form the super group: Serial Killers. The tour kicks off in Holland on March 25 and closes out in Russia on April 10th. A full tour itinerary is listed below.

When B-Real, the front-man of the legendary hip hop group Cypress Hill conceptualized his next group effort, he envisioned putting together a team of emcees with the sole purpose of murdering every track and any competition.

The first member he reached out to was fellow West Coast legend Xzibit, known for his brash vocals and hard hitting lyrics. They were then joined by Demrick, after the three recorded the track “Don’t Ya Dare Laugh,” a standout offering from B-Real’s 2009 solo debut. After such long, successful and legendary careers, the group wanted to enhance the essence of their writing and rap skills, and tell the world how they would still demolish wack rappers.

With over two decades of hip hop experience, 25 million plus records sold and a worldwide fan-base, B-Real and Xzibit combined their energy along with Demrick’s fresh outlook to create an aggressive sound which can only be described by the definition of their name: Serial Killers!

To follow up on their critically acclaimed project Serial Killers Vol.1 (released October 31, 2013), the three MCs are taking their killer show on the road. 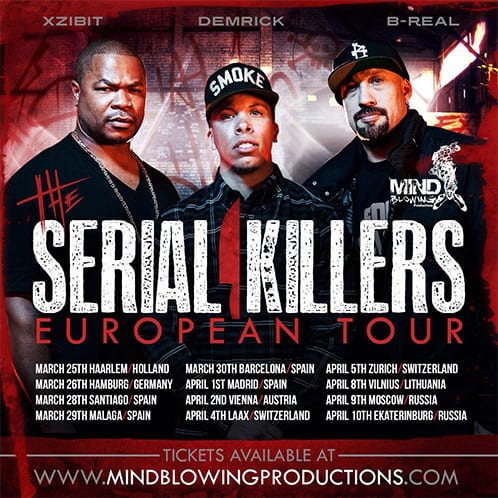