If you met Kosha Dillz on his never-ending tours with artists like Snoop Dogg, Matisyahu, or Alex Clare, you may have gotten an awkward vibe bordering traits best described as “weird, “slightly off,” or “Hustler-esque.” While many artist would stuggle with such descriptions, Kosha owns these traits and turns them to his advantage. He boasts his own playable character in NBA 2K11 and 2k13 which has sold over 5,000,000 copies; Kosha is also the only rapper to ever perform in hebrew at the BET Hip Hop Cypher; He is labeled as the “rawest Jewish kat I know” by RZAand toured with him nationally for “The Man with the Iron Fists; He single handedly secured the license to number one rated Super Bowl commercial by USA Today in 2012 with Bud Light’s ‘Here Weego’ campaign. Not too shabby for an awkward Jewish rapper guy.

The album is remarkable in its eclectic mix of musical styles. Juxtaposing sample-free synth heavy creations with Gangsta Boo of Three 6 Mafia joining Murs on “Where My Homies Be,” the album depicts the kind of map Kosha covers with his friendship. Kosha’s middle east twist on songs such as “Wavy” would rather have Mom put her hands up than turn up, while songs like “Fwends” recall Kosha’s sober cocaine-induced fights with Katt Williams. “Zionist Yoga” compares politics to children, while “We are Different With Murs” offers insight into the artist’s psyche and encourages us to embrace what he truely is. Different. ( awkwardly awkward vibe. )

Kosha will release his brand new album, Awkward In A Good Way, on November 5 on the label #MURS316, created by Hip Hop Manifesto Murs (independent rap extraordinaire and brainchild of Paid Dues). 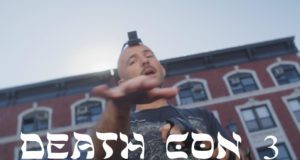