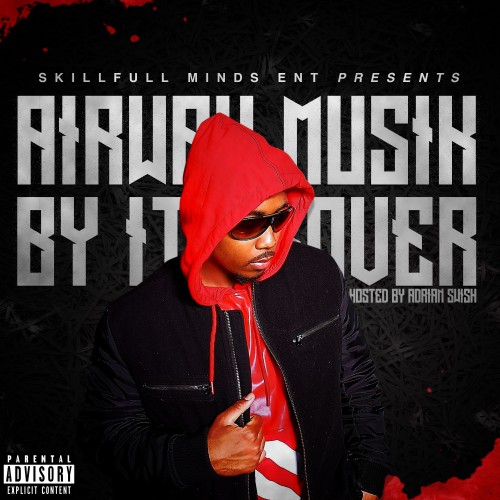 For all music junkies who don’t know who you are, let them know? Where are you you from? How did you come up with your stage name?

I’m Airway Musik coming from the westside of things. I grew up in Inglewood, California. When people ask why I call myself Airway I tell them, “There’s so many people on this path to get in the game, that I take a different path…the Airway.

Being From Los Angeles, how do you feel about the current state of LA Indie Hip Hop? Any artists other then yourself you feel that stands out?

I like the state that it’s in. I feel like right now artist are really being Artist again. It’s no limits with creativity and it shows in this current state. There so many artist that stand out, but I have to say I Nippsy Hussle really is doing it big being independent. You got to respect his grind.

Congrats on success of your latest Mixtape, “By Its Cover” . Feel free to breakdown the creative process of the project. (features, production, etc). Where can people find the project?

Well the name of the stems from the saying, “Don’t judge a book by its cover”. I can come off as laid back and nonchalant, but don’t get it twisted there’s a fire in me that people don’t see until it’s time. Most of the tracks touch on that go getter mentality that I poses.

Will you be launching any new Music Videos in 2016? And If so off of what project(s).

No music videos are scheduled as of now. If I do a song that ends up being a single then defenitly a video will follow. I do intend to post performances that I have throughout the year on youtube.

What advice would you give a 12 yr old kid who wants to be a DOPE MC like yourself?

I’d say if music is what you want to do you have to put it first. The more you practice the better you get and the Doper you become.

How does social media playing a role in promoting your music? How are fans / supporters helping the movement?

Social media does play a big role because it allows me to reach people that I don’t get to see face to face. I can post a link to my latest Mixtape and it beats passing out cds. Every time a fan shares my link or post on their page it’s another opportunity to gain a new fan.

Our most important question: what’s your definition of “underground hip hop”?

That’s a good question…Underground hip hop is the foundation. It’s the roots in which mainstream stems. It’s real, raw and unapologetic.

Where can people find you online? Any links?

I got to shout out Underground Hip-Hop BLOG for putting me on, Any body that rock with my music, My manager Jskillz and skillfullminds E.N.T.