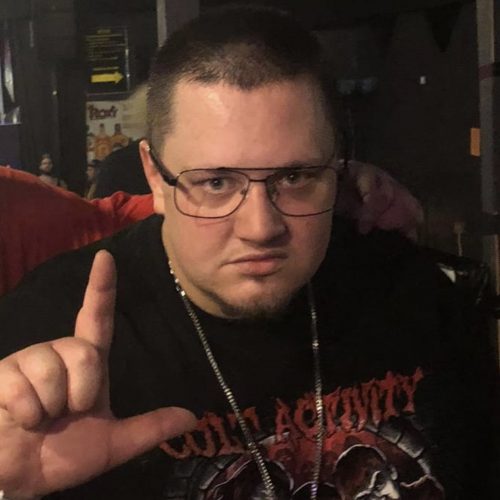 My first memory of hip hop in my life would be at 4 years old watching LL Cool J’s music video for Mama Said Knock You Out & running around the house singing it. The next memory I can remember, where I can say I fell in love with hip hop would be at 11 years old about ‘98 when my Filipino homie Mark showed me Bone Thugs-N-Harmony’s debut EP Creepin’ On ah Come Up. I was definitely late to the game, lol.

My moniker originated because my actual name is Damian Pavlovich & my father’s last name is Quinn. So when i decided to make my stage name i just switched my first name to match Damien Thorn’s name from The Omen & since Pavlovich wasn’t Hollywood ready I went with my father’s last name. Which is literally the only thing I got from the motherfucker, except the chance to be able to walk this beautiful earth lol! When creating this name I had no clue there was an Irish Folk singer named Damien Quinn & I’m pretty sure by now he fucking hates me.

What was it like growing up in Plainfield, Wisconsin?

Lol I was actually born & raised in Kenosha, but I say Plainfield in most bios because I live in my own sick fantasy world where I try to embody everything that is Edward Theodore Gein.

Could you name your top 5 horror movies?

I first crossed paths with LSP in June of 2006. When I wanted to create an annual show that was based out of Wisconsin that showcased underground music named The Bury tha Living Show. During that time I was active on KillMusick.com‘s forums & became friends with 2 local cats that were known on the forums as the K-Town brothers. They suggested Scum’s music to me & told me if I would give him a set on Tha Bury tha Living Show they would fly him out. At the show, I was introduced to Scum & his brother Seville & we hit it off without a hitch. Since Seville lived in Indiana, we would link up everytime I had a show down there & when it was time for him to throw Indiana’s version of Scum’s annual Gorefest in Denver & he made sure I was apart of it. About 6 months later, an offer came to me to officially be one of the first artists signed under Seville’s new record label LSP Midwest. Unfortunately about a month later, Seville unexpectedly passed away. 6 more months went by before Scum called me to talk. At the time I had started a group named Dark Half with 2 other local musicians from Kenosha: Garrett Erskine (Geno Cultshit) & Pete Batten (Gauge). At first Scum was reluctant to sign a group but after convincing him that these 2 gentlemen would grind as hard as I do he was down to sign Dark Half and the deal was on & then a month later Gauge left the group, lol.

This past summer, you dropped your official solo debut Disorder. What was the inspiration behind that?

The inspiration behind Disorder was really seeing the evolution of hip hop & wanting to put my own morbid twist on a modern sound. Except for the punk rock tracks those were inspired by a shitty, grimy lil’ city they call Kenosha. Growing up punk rock was huge in this town.

Also just several months ago, your new group Cult Activity made their debut with Population 909. How did that come about?

Cult Activity consists of me, Bloody Ruckus, S.A.W. Da Ghozt & Kris Kane. It was actually a project that Geno Cultshit & S.A.W. da Ghozt started while drinking one night. It was going to be a mixtape series that featured various artists that were down for the Cultshit movement. After he passed, we decided to keep the name & make it as a group in his honor. Population 909 was our first release & it was themed after the Jonestown Massacre to coincide with our stage show. Yes this is entertainment & we want you to believe we‘re deranged cult leaders, but the Jonestown massacre was a tragedy. Children lost their lives & that is nothing we are trying glorify. R.I.P. to anyone that lost there lives in the Jonestown massacre on November 18, 1987.

Do you have any plans for this year?

With the current state of events things are constantly changing all over the world. Causing events & projects to get postponed. As soon as shit gets back to normal I plan on dropping a solo EP & 2 Dark Half albums; including the highly anticipated final Dark Half album Sick at Heart & hitting the road with my LSP brothers M.M.M.F.D. & my sister Razakel with Shrunken Head Entertainment on the Revolving Nightmare Tour.

Lastly, do you have any advice for those trying to set their foot in as recording artists?

My advice would be that if you‘re going to take being a musician/artist seriously you must invest in yourself.

1. Opening for local venues & selling tickets will increase your fan base.

2. Buying quality beats & getting quality mixes on each released single.

3. Make sure you make a connection with your audience. Be 100% real with them.

4. Merchandise is a must.

5. Network with other artists.

6. Have visuals to represent yourself online.

Above all, hone your craft & differentiate yourself. Always have the mindset…”What Can I Bring New to the Game”.