For all the readers who don’t know, is KennyOffTh3Henny your real name or your artist name?

Kenny’s my actual nickname. The Off The Henny part (stylized as OffTh3Henny) was added since it had a better ring to it than my true full name.

How long have you been making music? Any specific influences?

I’ve been playing guitar since I was 8 and started recording some of my rock music covers and originals when I was 13. I made my first full-length rock album as a senior project in high school, but once I entered college I took an interest in Hip Hop production since I had love for the genre and movement as a whole since I was a teenager. I’m sort of an old head at heart, so I’m sure people can hear the influences of Nas, AZ, and Eminem in my rhymes. One of my biggest modern-day influences has to be an underground rapper named Calvin Coolidge. Dude was a criminally underrated lyricist.

What city you from? How is the Hip Hop scene there?
I’ve lived near and/or right outside Baltimore, MD for most of my life. The Hip Hop scene is live for both the mainstream and underground. Huge names get to perform at beloved venues like Soundstage, Rams Head Live, and even RoFo Arena. Despite its bad reputation for things like the crime rate, a lot of parts of the city are very cultured and has open mic nights, small venues, etc. where no names can showcase their art whether it be a spoken word poetry type thing or SoundCloud-type rapping.

Congrats on your latest project “Beginnings” which we just did a review on dropping soon. Break down the project in a few words.for us. Also, who designed the cover art?

Thanks, man! It’s a 13-track album (I’ll still call it a mixtape for fun even though I made all the beats lol) that has a first half drawing heavy influence from 90’s-era Hip Hop and a second half focusing more on modern styles. My girl actually is big into graphic design and made it for me. I think it looks very dope!

How are fans and supporters reacting to your project?

So far I’ve received primarily positive reactions for it. However, I really crave constructive criticism so that I can continue improving my craft, so I’m really looking forward to UndergroundHipHipBlog’s album review so I can see what unbiased minds have to say about it!

The collabs you have on it, how do you know JShock, Ric Ward of Downhill Uprise and Phil Michael?

JShock is my boy Josh from high school. Me, him, and Phil Michael used to chill almost on the daily when we were all boolin at McDaniel. Ric Ward is actual the singer in my rock band, Downhill Uprise, which is my biggest other passion aside from Hip Hop.

Any future collabs or projects you working on for 2020?

JShock and myself are actually in the process of plotting a collab EP or album later this year. He draws a lot of influence from Spitta, Wiz, and Benny the Butcher, so I’m beyond hype to see what kind of production, hooks, and subject matter are going to come out of it.

Our highlight question, what your definition of underground hip hop?

My definition of it definitely has to be that the underground is the place where artists can truly exercise what is truly dying in the mainstream…the “art” in artistry. In the mainstream and on the radio, there are certain rules, expectations, limitations, and censorship that turn this movement and culture into commercial fast-food garbage sometimes. The underground is the only place where I feel as though artists can still talk about what really matters to them and what issues there are in their life and community, in a way that still resembles what Hip Hop stood for when it first started. Just because it’s the most popular genre nowadays doesn’t mean we should let the capitalist aspect of it take away from what it truly set out to do in the first place.

Where can people find more of your music other than Spotify?

Right now ‘Beginnings’ is available on Apple Music and YouTube. It should be available on Deezer, Tidal, iHeartRadio and more in the next week or two. It’s also apparently available on iTunes? I thought they discontinued that platform, but hey, I won’t complain!

Lastly, any shout outs you have?

Shout outs to JShock, Phil, Ric, Jordan, Pipe Lord, Curtis, Smulu (what his name really is, Smulu), and all my guys that are in this thing together with me. And lastly, UndergroundHipHopBlog for their dope content and coverage of underground artists! Much love. 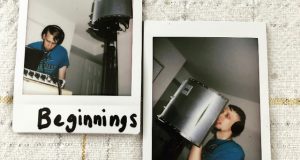