Joe lazarus a.k.a. Dirty Laundry started rhyming back in ’96.  He is well known in his hometown as one of the founding members of the Riot Squad, a collective that spawned such artists as Killatacticz, Sanctum, Wontime and many more. Joe’s known for his wild and versatile style, ranging from serious topics to more humorous, upbeat joints. A local legend who has seen and done his share to uphold the culture and it’s values, Joe’s still going strong with upcoming releases featuring various artists from all across the globe.

Over the course of his career he has collaborated with many artists and was the opening act for artists such as Starflam (BE), Postmen (NL), E-Life (NL), IV my people (F), Blade (UK), R.A. The Rugged Man (US), Slaughterhouse (US), Chino XL (US) and legendary groups The Furious Five (US) and De La Soul (US).
he’s been featured on various albums and mixtapes, Including
-Sanctum: De Bevestiging
-Bloombury Productions presents: L.o.u.v.a.i.n.
-Juz Kiddin: Spit personality
-Big bout ya Records presents: Shark attack riddim,
-Big Bout Ya Records presents: Beatstreet sound v2,
-Dj Damented: Networking v1,
-Hitfarmers: Hitfarmers
-Morsdood: Open Mic,
-Aprock presents: Joining Forces
and many more.

His first solo effort, released in 2012 is entitled Dead Stock: The Mixtape, a collaboration with DJ Dysfunkshunal
his second release was the Shreds of Metal EP, featuring, Dj Grazzhoppa, The Mixfitz, Lost sun, Luché Salazar, Kenshin and Xavier Carion
Currently, Joe’s working on a new project called “INK”, which will be his first full solo album. The first single of “INK” is called Skywalkers (feat. DJ Grazzhoppa, Don streat and JMega) and is coming out soon …
Other guests on the album include Kool G Rap, Conz, Revalation, Sem Phi, Renegade and many more! 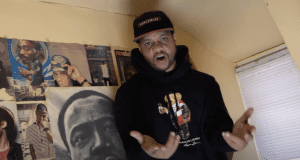