Detroit rap polymath NOLAN (a/k/a Nolan The Ninja) delivers a shot of modern-day nostalgia with his slick new video for “CC,” the NYSA BRUX-produced banger off his latest project, TALK SOON. The visuals are directed by Humans & Co. Productions, who strip everything down to its elements to highlight the track itself as NOLAN pokes fun of modern day rap culture. The visuals also complement the aforementioned throwback vibe, which is emphasized by NOLAN rocking a Fat Boys tee (RIP Prince Markie Dee) and reading an issue of VIBE from March 2000. Everything about the “CC” video is a celebration of both the track and the entirety of TALK SOON, which features NOLAN tinkering with a new approach and achieving some seriously dope results. Check out the video for, “CC” and head over to your preferred digital retailer or streaming platform to support, TALK SOON which is also available on purple vinyl in limited quantities via Fat Beats. 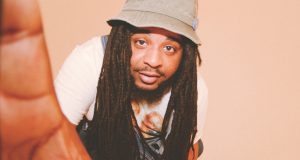