Not much has to be said about Los Angeles based recording artist Rabitt Tunes , the man is just a beast! Born and raised in the valley (Van Nuys), Rabitt Tunes started his music career long before his passion for hip hop arose. Playing a variety of instruments as a child,Rabitt Tunes developed a love for the melody, but had no idea that he would incorporate that trait later in his hip hop music. At age 15 he met Nalo Duvalle, a hip hop producer, who inspired him to take his love for music a step further. Rabitt Tunes began producing his own beats, writing, recording/engineering, and performing all over southern California. He says he plans on makin music that has a positive message, and apologizes in advance when he is pushed to say FUCK YOU sometimes, he’s only mostly serious. To Listen to RabittTunes complete mixtape hosted by New Jerzey Devil click link: http://hnhh.co/mcxkk . 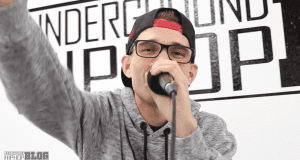