Leedz Edutainment is an underground record label based in Boston, Massachusetts that has been around for a little over decade now. They already have a quite a few showcase compilations under their belt already with the Mass Movementz duology as well as the Write Off tetralogy & Eastern Standard, but are kicking off the summer by returning in the form of A Worker Among Workers.

After the “Introview”, the first song “Edutainment” by S.T.R.E.E.T. is a triumphant boom bap opener asking if y’all are entertained or not whereas “Hustlenomics” by XL the Beast works in some pianos to declare that you’re in the presence of a monolith. “Massive” by REKS, Slaine & STL GLD has a more rowdier tone to it with the trio talking about doing that shit & after the “Threat” skit, “Demons At Your Door” by Reef the Lost Cauze & Wildcard takes a turn into trap territory asking what you gonna do when your demons want war.

“Hands of Time” by Blak Madeen & Smif-n-Wessun finds the trio coming together over bass-guitar laced instrumental to discuss the concept of time & after the “It’s All Hip Hop” interlude, “Heavy Decorated” by Ace & Edo, Akrobatik, Bugout & El Da Sensei sees the 5 asking what your life like over a soulful boom bap beat. “The Rent’s Due” by A-F-R-O, Jarv & Spose vibrantly explains the reason why they had to make another jam just before “Lyrical Plunger” digs up an old freestyle from 1999 that still sounds fresh today.

Meanwhile on “You Still Gotta Rap”, we have Checkmark & The Dunnas delivering some battle bars accompanied by a quasi-funky groove to the instrumental leading into the Parker & Leedz interlude. “Once Upon a Time” by Jon Hope & Skyzoo is a fresh piano ballad discussing what hip hop is to them, but then Blak Madeen recruits the late Baba Zumbi & Locksmith for the socially conscious “Rise Up” remix that I like better than the original.

“Stuck in My Way” by Peter Manns embraces a more deadpan tone confessing he hasn’t been himself in days while “Spiritual Awakening” by Pvth, Ren Thomas & Vincent Tesoro marks the return of the boom bap to represent God. After the “Hustling in the Wrong Direction” interlude, “Tools of the Trade” by Lateb is a guitar/boom bap fusion talking about finding their way while “Dark Magic” goes full rap rock so Jazzmyn Red can address ego someone’s ego not allowing one to be set free. After the “Results Business” interlude, the final song “Feed the Fire” by XL the Beast ends the album with a more atmospheric ballad pouring his heart about how it’ll all pay off & “Thanks For Coming In” is just a spoken word outro.

I’ve enjoyed every single compilation that Leedz has put out in the last 15 years or so, but A Worker Among Workers honestly has to be my favorite one of the bunch thus far. The Arcitype did a fine job at producing a vast majority of it & the list of guest MCs that the label brings together to do their thing on the mic is pretty consistent. 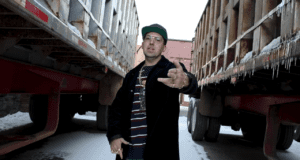