Coming out of Santa Ana, California, Illnes is a bilingual lyricist who dedicates himself to expressing his truth to whoever will listen. This month saw the release of his latest album which is aptly titled “Straight Outta Quarantine”. This is a 13 track body of work that delivers some clean boom bap production and features from Hijo De Mata, Cable Vivo, Fred Word, Moha Umo, Alpha Ready, Salvadoreina and Cris The Kid. Let’s get into this!

“So Sick” is a stand out track that takes us through how Illness sees the world we live in. A relatable track to many as he delivers clever bars that are a nice mix of grit, depth and frankness. Hijo De Mata provides a clean assist on the hook and bridge, taking us to a nicely executed climax. Production wise, the track is simple. Melodic synths and classic hip hop drums. The slightly robotic sound scape was a nice touch!

“Now a Dayz” is the tenth track on the album and features Cris The Kid. Menacing, hard hitting hip hop production gets us started and really carries us home from start to finish. Cris is tasked with the opening and does a good job with impressive cadence. Illness comes in hard and drops some early bilingual bars in this track. Both rappers drop some slick bars and a sly little nugget at the end with that back and forth. Electric guitars to take us out and we have ourselves a dope track.

“Slashing Wanna Bees”, this track is just Illness spitting bars, heavy bars over a heavy underground hip hop beat. I’m feeling it. He is really in his element on this track. He dances all over the production with effective flow switches. His Spanish flow in the middle of the track is a true stand out. I’m not sure if I have ever heard anyone transition between languages so smoothly. Good job!

All in all this is a good body of work. Some of the production could have he’d a little more depth in them but Illness is consistent and is careful with his feature selection. If you’re into real, raw and bilingual underground hip hop music, this project is for you! Go follow Illness on Instagram: @illnesinfection 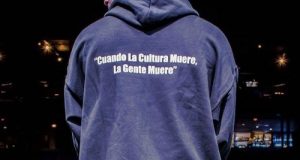