Jonny Rythmns is a producer from Queens, New York who’s been on a roll by dropping a beat tape every week throughout February with the first being Elevated Focusion on the first Friday of the month & that was followed up last Thursday with Let’s Get All Silly & Weird. Here we are at the 3rd week & we’re already being treated to his 3rd consecutive tape.

“All That Glitters Ain’t Gold” is a luxurious opener with it’s wonderful keyboard & string arrangements whereas “Hypnotic Space Groove” lives up to it’s name as the synthesizer throughout just makes you wanna light one up. “Behind Door #2” follows it up with something that sounds like a climatic moment in a sci-fi flick leading into “Earth Bound”, where these synths are laced with some drums that just thump you in the chest.

Meanwhile on “A Funky Little Collision”, we have Jonny providing the soundtrack for what I can imagine to be a futuristic party just before the style of “3rd Stone from the Pizzaria” kinda reminds me of Daft Punk’s 3rd album Human After All. “Just Here to Roll” follows this up with a more minimal yet electronic tone, but then “Force of Nature” almost has a bit of a Neptunes influence to it which I love because that’s my favorite production duo of all-time.

“Galactic Crime Syndicate” takes the boom bap route throwing in some dramatic keyboards & synth-horns while “They Call Me Pebblestone” goes full blown electro taking it back to the 80’s. “Hit Hard & Get Loose” follows it up with a singular piano note & some synths while “Victory Dance” almost has a bit of a techno flare that I really admire.

Following that, “Have Some D.M.T. on Me” does in fact sound like a drug trip as the synth melody throughout is very wavy while “The Come Down” returns to the boom bap except this instrumental is string-heavy. “Mutiny” has to be one of the weaker beats on here as it just seems a little clunky to me, but “Blood in the Streets” follows it up by paying homage to Eminem’s production back in the 2000’s.

“Collateral Damage” makes me feel like I’m playing a space mission in a Crash Bandicoot game while “The Horror” follows it up with a more atmospheric tune. The penultimate track “Another Story Told” preludes the closer with a more laidback cut & finally, “Farewell” sends the tape off with yet another Neptunes homage.

Compared to the other 2 tapes that he’s dropped prior, I think Slow & Steady has to be my favorite one thus far. The whole concept of it will draw you in from the start & my favorite thing about it has to be the wide range of influences that he draws from. 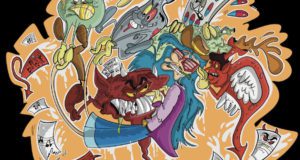 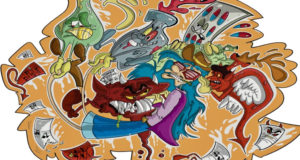