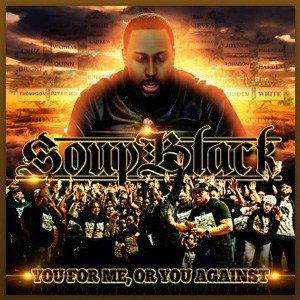 Hailing from Harlem, New York, Soup Black arises from the underground with a hot new album and a leading new single in “Big Plans”. Off his latest effort You For Me, Or Against Me, the breakout single is Soup Black’s global introduction. Perfect start to a great promotional campaign for the new album.

Black’s single is a potential game-changer within the underground. Discussing plans to conquer the mainstream and taking the underground along with him for the ride to the top. Backed by a strong gospel supporting cast, “Big Plans” is the best representation of what the new project has to offer.

Stream the new single by Soup Black below, courtesy of Spotify.

The production is the song’s crown jewel. Well organized, carefully built, and holds a tremendous amount of notoriety thanks to its sample selection. Architecting a plush platform for the lyrics to build more depth and value. Its the enriched soul provided next to the heavy bass that makes the production outstanding.

Acapella, Soup Black as a sub-par flow that ride=along the great production. While more about the sound than what was exactly said, Black’s word were impacted with nos energy from his lips. Aggressive, “Big Plans” is talented while Black’s wordplay is simplified. Its the song’s authenticity that sells, as the act’s word is simply the cherry on top.

For debriefing, “Big Plans” is a well placed single off Soup Black’s latest project. Serving its purpose of crafting a bonafide hit, the new single surprises with radio-friendly hook and feel. Big production that brings out the full value of the song. Soup Black successfully builds great anticipation for the project on the back of the song alone.

Tagged with: Big Plans Harlem new york Soup Black You For Me or Against Me