The Dark Album is Watzreal’s 4th album. This project takes a much more introspective look at Watzreal life, his mental health, and societal issues at large. During the 12 track album we see Watzreal explore his his darkness through his depression, drinking and self doubt, as he struggles to find light in the form of hope, confidence, and self love. With some of his sharpest lyricism, his most sonically cohesive project blending dark, soulful and inspirational production, and his incredible levels of emotional honest, we see Watzreal in his prime as The Dark Album proves to be his magnum opus.

Watzreal opens the album with a chill boom bap flow with light hearted themes and witty humor. Our favorite bar is when he talks about wanting to be Keanu Reaves stunt double. He glides over a  laid-back production with a welcoming tone. He continues a similar theme into his next track using this chill flow to let his audience know this is a track to relax and meditate on. While he has his listeners attention, he quickly dives deeper into more pressing matters. The transition is rapid where he then goes into detail on social issues and the faults of political structures. He deploys complementary features that add to his message of empowerment and vindication for those oppressed by the system.

From this point the album essentially gets much darker. While it’s instrumentals remain meditative and relaxed, his tropes wrestle with existentialism. He compares the scientific study of dark matter to the fallen world we live in. These two pillars both invisible yet totally real, are seemingly complementary in his mind. One cannot exist without the other. He struggles to gain optimism in a universe that is inevitably caving in on itself. He laments on his past relationships and trauma. He uses these experiences to relate to his listeners and unify them in life’s struggle.

However, Watzreal bounces back on the closing track of the project ebbing and flowing much like the wave on his album cover. He drifts back-and-forth between past and present and comes to the edge of acceptance. It’s an album about life’s ups and downs, stills and swells. He reminds us to remain present and to enjoy what we have while it’s still here and for that we are thankful. 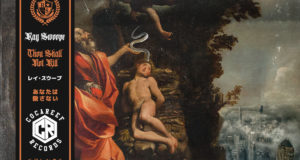 Ray Swoope – “Thou Shall Not Kill” (Album Review) 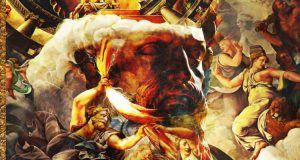