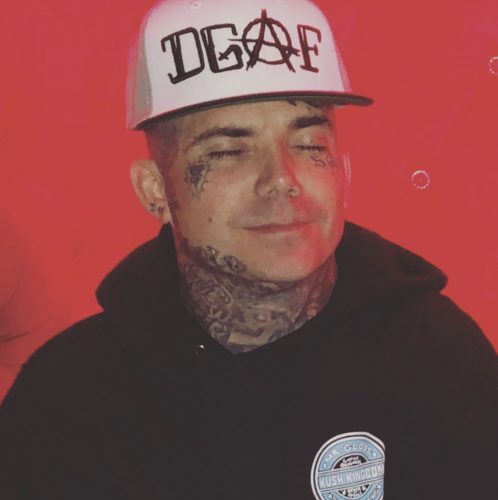 Who’re some artists that inspire you?

I’ve got a lot of my inspiration from a rapper called Kool Keith. I also look up to Necro, Tha Dogg Pound & OutKast.

What inspired your moniker from Chucky Styles to just Chucky Chuck?

Well I’ve gone by Chucky Chuck since I was in high school so that’s been my nickname forever & the Chucky Styles nickname was given to me by DJ Bobby B after he saw how I can ride a dirt bike.

How did you cross paths with the Kottonmouth Kings?

A few of the members of the band lived in my hometown of Redondo Beach & I got introduced to them by my homie Gillies. After that, I started working for them setting up the stage & became one of their signed artists.

What was the inspiration behind DGAF as a group & as a clothing brand?

The freedom of self expression answering to no one, having fun living life to the fullest & being yourself & not caring what anyone thinks about you.

Last year, you dropped your solo debut Henchlord. Could tell me the inspiration behind that?

Henchlord was produced by Eddie Ruxspin & I just took inspiration from years of running the underground, the ups & downs of the scene & just being a marijuana enthusiast.

You even started up your own podcast this October. Why is that?

I would get 12-15 messages a week about people saying I should start a podcast, so a few of my friends got together over at Kush Kingdom & we made it happen.

Are you working on any new music?

I’m working on an EP right now to be released on Suburban Noize by April 20, I have a follow up to the Henchlord record & I have a new group in the works with my friend Rhett Parker called Dead City Villains coming later this year.

What else can we expect from you in 2020?   Lots of shows & festivals & a few more tours more clothing drops in albums coming this year.

My only advice for upcoming artists is to be yourself, don’t copy anyone else’s style, be original & truthful in your music. And stay humble. There’s too many big headed rappers out there we don’t need anymore.