Salute to you and your recent album “Trenta3” For all the readers who don’t know, how did you get your artist name Zen Dash?

Zen is my goal and dash is literally a hyphen, it’s the only part of all of my old rap personas I decided to keep.

Tell us about the Hip Hop scene out in Brooklyn, New York.

Idk shit about the Brooklyn rap scene I’m an internet nigga I don’t fuck with nobody but my real life friends.

Bumping DMX “slippin” on repeat and being an emo ass nigga before that was even a thing.

Too many to name, if you think you hear it you’re correct, but obviously I wear a mask so you know who it is.

Are you a movie buff? Almost every rapper we come across, they all have this in common. What’re your top 3 insperational movies?

Top 2 are “the fifth element” and “Leon the professional”, I’m a luc besson head, third is probably hot fuzz, it’s probably a perfect movie , no fat on that thing.

There’s no such thing as a top 5 in music, I could never rank music properly, you either suck or you don’t. We gotta stop respecting niggas opinions in general lmao.

You recently dropped your brand new album “Trenta3″. What was the inspiration behind that? Dope album cover!!

Like I said it was originally a 3 song EP each song representing a decade of my life. But then I decided to just do a 3 album arc based on the teachings of Alan Watts cuz I thought covid would kill me and I wanted to leave a little zen behind. The cover was made by my friend Tracy, it’s a glass mosaic of a raven, it’s kinda too esoteric to explain, ravens are cool.

I don’t fuck with purists, they’re pussy. Underground just means you ain’t a millionaire off rap. I believe that this is an artform and it ain’t about money. But if I had some money, I wouldn’t be no underground rapper. If anybody wanna fight me pull up bitch. 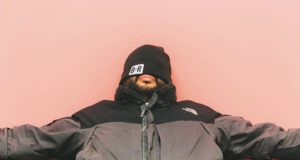