Hey Griffin House Music, we have never come across an father and son duo as talented as you guys! We are really excited to be promoting your movement and expose such dope and honest underground Hip Hop to the fullest! How the hell did this happen!!?? Give us some background on how long you two have been making music? Also, what area code your guys rep?

Well, Twigg started making music when he was about 25 and after having me, I started to write lyrics at about 7 years old. Years later, Twigg started up Griffin House Music with 2 other members and I wasn’t even one of them. They were working on a song and I wrote a verse to it and showed my dad. I was added to the group and over time, the other 2 had to leave. We have been a dynamic duo representing the 208 ever since.

How important is ORIGIANLITY to you both? you guys def have your own style? We noticed you guys definitely have FUN making music together!!

Originality is pretty important to us. We have developed our own kinda sound together because we get to make music so often due to the fact that the studio is right down our hall. We listen to a lot of music and it definitely influences our style, but we don’t try to mimic another sound.

Tell us about the creative process for your new album “The Collaboratory“! We noticed this project is jam-packed with quality features?

It started with a few songs that were made for a different project. We had a few friends come over and lay down some verses, some of our producer friends had given us some beats, then before we knew it we had like 7 collabs. My dad brought up “The Collaboratory” as an idea that he’d had for so long and now we have enough to make it actually happen. So we took those 7 songs and then thought of what we could add to it. That’s when we branched out to get some people that we don’t normally network with and it came out awesome.

Hey POPS!!?? What is in your music rotation now in your car?? Also how do you feel about the the whole LIL phenomenon? Same seems like all these new age rappers be starting their names with LIL in front of them…LOL

Any new projects and videos you guys are working on? Planning on a tour anytime soon?

We haven’t toured yet, but eventually we would like to get something going. We all work full time jobs outside of music so it’s hard to leave town for a few months. As far as projects, we have quite a few on the way. We are doing a free mixtape, and a couple albums from our “GHM” label and we are extremley excited about them. However no titles or dates can be released at this time.

Seems like the underground/independent movement is growing extremely fast, so many artists making huge moves not having to deal with major labels. A&R’s now are signing indie artists based on how many followers they have rather than quality music? Do you guys chase social media numbers or are you guys waiting to one day get signed?? Give us your thoughts…

Well, we really just make music that we like to listen to. It is unfortunate that they base everything off of views instead of the sound itself. We are very proud of the music we make, and if we were to sign a label we would have to keep creative control and they would have to truly offer us something we can’t do ourselves.

Out the box type question, If it came down to 1 ALBUM only, what underground Hip Hop album would you consider THE BEST OF ALL TIME!!!???……One 1 album you can choose. We are sure your guys answers will be really different… or not…Lol

Twigg – “MGK Lace UP Mixtape” It’s the only old school MGK still in rotation cause every song is a banger. I don’t skip any of them.

B-Guy – “Eminem Marshall Mathers LP” Cause when it came out, it was super underground and it completely changed the game. It’s forever a classic.

Your definitions of “Underground Hip Hop”

We believe that underground hip hop is music not made for radio. That doesn’t mean it can’t be played on the radio, but it isn’t made for the money. It’s made for the craft. Whether it’s grimey as hell, super lyrical, or a club song cause my buddy made a banger and we couldn’t help ourselves. It’s made for the artist. And bars help lol.

Drop all your guys music and social media links!

Shout out Kaeleigh Arguello, our lead singer. She’s awesome. Shout out to Cam Groves for getting us that verse all the way from Maine. Shout out Chris Webby. I was so excited for that song. Huge thanks all the producers and all the artists that helped make the Collaboratory possible. (There’s too many to name). 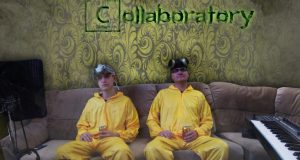 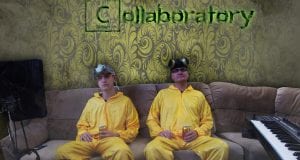