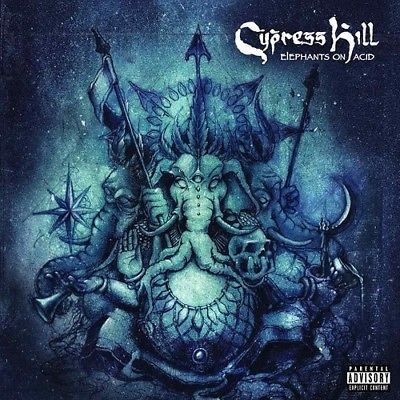 Cypress Hill is a legendary West Coast hip hop group consisting of MCs B-Real & Sen Dog alongside producer DJ Muggs & percussionist Eric Bobo. Their first 3 albums are widely considered to hip hop classics, but their material since then has been considered average. However, they are returning with their 9th full-length album after an 8 year hiatus.

After the Tusko intro, we go into the first song “Band of Gypsies”. Here, B-Real & Sen are spitting battle bars over a psychedelic beat. The track “Put ‘Em in the Ground” gets murderous over an eerie vocal sample & after the “Satao” interlude, we go into the song “Jesus Was a Stoner”. Here, B-Real makes many references to weed & religion over an instrumental with a haunting atmosphere.

The song “Pass the Knife” returns to the murder bars over an eerie beat & after the “LSD” interlude, we go into the song “Oh Na Na”. Here, B-Real of course talks about getting high over some infectious horns. After the “Holy Mountain” interlude, we go into the song “Locos”. Here, B-Real & Sen deliver street bars over a gritty beat.

The track “Falling Down” confrontationally talks about life over a distorted bass line & after the “Elephant Acid” interlude, the song “Insane OG” pretty much speaks for itself over a apocalyptic beat. However, I wish it was longer than just 84 seconds. “The 5th Angel” is an instrumental interlude that sounds like it could be playing in a trailer for an upcoming horror movie while the track “Warlord” talks about judgement day over a fitting boom bap beat.

The song “Reefer Man” is a sequel to “Dr. Greenthumb” with a tuba-inflicted boom bap beat & after the “Thru the Rabbit Hole” interlude, we go into the song “Crazy”. Here, B-Real & Sen talk about insanity over a trippy beat. The track “Muggs is Dead” is a psychedelic instrumental interlude while the penultimate track “Blood on My Hands” sees B-Real comparing himself to the Grim Reaper over an ominous beat. The closer “Stairway to Heaven” sees B-Real talking about his prediction of the afterlife over a prominent woodwind sample.

From front to back, this was a strong return to form for Cypress. Sure there are WAY too many interludes, but DJ Muggs’ production is just as gritty as the old days & it’s a bit more experimental too. The lyricism is sharper as well. If you wanna hear a fantastic comeback album from one of the greatest West Coast groups ever, PLEASE give this a listen.