WOW! What a fresh ass album “The Ghost and the Darkness” you guys have to showcase to all of us underground heads! Bernard Kyng & Andre Hando, it’s really refreshing to know you guys are dope up and comers in the game today holding the indie/underground Hip Hop torch nice and high! For the music junkies who don’t know who you are, let them know? Where are you guys from? How did you guys become Hip Hop artists?

Andre: I was born and raised in Los Angeles. I grew up with my mother and father who was a choir director and proficient bass player. It was through him that I was exposed to Melody and most of my favorite artists (musiq soulchild, Erykah badu, 50 cent, Frankie Beverly). Before entering high school I told my parents I wanted to pursue a career in the music business. My father proceeded to convert our dining room into a fully functioning studio and I’ve been writing music ever since.

Bernard: I was born in Inglewood and raised in South LA. I got into music simply because I love it. I consider myself a writer first. You mix those two things together and recording music is the obvious conclusion. I’ve lived in San Diego, Long Beach, Santa Barbara, and now I reside in Tustin.

Where does your artist names Bernard Kyng & Andre Hando derive from?

Bernard: Well, Bernard is my name. I chose Kyng as my artist surname because I carry myself in a regal fashion. I had to switch up the spelling though, so people could distinguish me from the HOF basketball player.

Andre: My middle name is Andre. I lifted the name hando from an obscure Russell crowe movie.

We recently conducted a review on your new album “The Ghost and the Darkness”, and Kevin, one of our main contributors really covered your album well! Please give us a brief background story on the creative process behind this body of work! Also, whats the idea behind the your album artwork cover?

The process for this project was fairly easy. We tracked most of the vocals between my home studio and Hybrid Studious in Santa Ana, CA. I feel kyng and I are both great writers and once we had general ideas of where we were heading with each song, filling them out was no issue. The idea behind the album title and cover art was the film “The Ghost and the Darkness.” Throughout the project I feel that we were trying to embody the two African lions that were the antagonists of the film. Not in a negative sense but in the sense of delivering a proud and fierce performance. The lions were just fighting to exist, as the railroad company began to develop the land that they lived on. I feel like we are just fighting to exist in the music industry.

We noticed you have a great tone, style and originality behind this album. How do you manage to stay creatively dope and maintain pushing dope material? As you know the majority of rappers can’t stay consistent on an album.

I feel like the lack of consistency is due to fear. A lot of people who claim to be artists are solely concerned with the statistics. I feel like we are concerned with those things but only after the message and pocket is where we hear it in our heads.

You and Andre Hando work extremely well together! How did you guys link up?

Me and Kyng met years ago through work. I’m not even sure if we connected through music until after the first year or two of knowing each other. This project was a long time in the making. Timing is everything though, and the pieces fit together for us to move forward with the project.

Being an indie artist, how do you feel about having the power in your hands, not having to rely on a label or company to push your music?

Being an independent artist is very dope. I love have creative freedom and control over my art. Being able to work with who I want and drop whatever I want when I want to is the definition of expression to me.

How does social media play a role in the brand Bernard Kyng? How are fans / supporters helping your movement?

Social media plays the most pivotal role outside of actually performing. That’s where the whole world can access your music at any time from anywhere. I’m creating my own world that people seem really interested in and willing to add to in order to make it a deep community of creatives and producers. The Planet Love way.

Underground hip hop to me is the soul of music. The one that’s evolved from gospel to jazz to rap and whatever it’ll be in the future. Underground is making it by your own terms in my opinion.

Where can people find your music? Drop all the vital links. 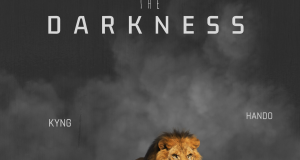 Bernard Kyng & Andre Hando – “The Ghost and the Darkness” (Album)