Sydney, Australia’s darkest, energetic, electrifying duo SMACKTOWN. The infamous two from the bandana crew are slated to release a seven track EP on Fight Music Records, the new offering ‘Powerless/Chelsea Grin’ meshes together the heavyweight electronic composition SMACKTOWN is renowned for, with the hip hop edge One Mic (Australia’s biggest underground hip-hop party) is known for cultivating. SMACKTOWN are continuing to push boundaries not only locally – as they’ve collaborated with some of Sydney’s elite artists- but have connected the new age sound internationally; the upcoming EP has picked up two MASSIVE rap features from the shores of America and a heavy remix by two electronic Italian Stallions.

The concept of this track/visual is that in the world we live in today, there actually is no freedom of speech and the white corporate world owns the system. Because SMACKTOWN have been spreading the truth and creating havoc, the ‘corporate’ capture SMACKTOWN to silence the movement but the visuals ends with a twist which gives a preview to the upcoming single.

Of all the industries, the Sydney nightlife stands as the most unforgiving, unrelenting and merciless. As fast as a promising new artist is swept into the limelight, he or she may be cast aside without a thought. SMACKTOWN has outlasted them all.

From their inception on the dawn of the new millennia, N3RY and CHICO CAS dug their nails into the very flesh of the Sydney nightlife. The moment the two hip-hop titans tore onto the scene, they both began their bloody and gruelling ascension through the dark and foreboding underground, ever-driving towards the pinnacle of the scene.

After nine years of turmoil within the viciously competitive hip-hop scene, both Chico and N3ry emerge bloodied and victorious; both with bastions of loyal followers and a solid vice on the jugular of the scene its self. It was then and only then, that these two lyrical juggernauts would collide And from the rubble and ashes, SMACKTOWN would rise.

SMACKTOWN tore onto the scene at break-neck speed. Their convention-defying genre of powerful and aggressive hip-hop vocals epically layered with heart-stuttering chaotic electro, sent shockwaves through the underground.

Today four years after their genesis, their sound and stage presence cannot yet be matched let alone be beaten.

From the moment SMACKTOWN take the stage, each of your senses are ripped into their command. Nothing braces you for impact as you collide with the unrestrained and fiercly raw vocals of the duo. The once paralysed crowd erupts into a sea of chaos, the cataclysmic driving bass, destructive synths and wild distortion saturates all hypnotised in a state of madness.

With the imminent release of their debut EP WARNING, SMACKTOWN have geared themselves to finally tear through any and all remaining barriers into a future of mayhem, disorder, rebellion and SMACK. 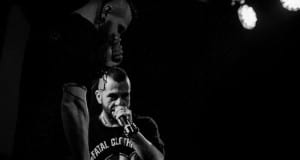 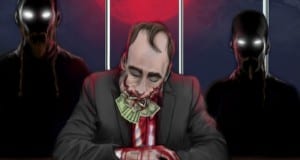