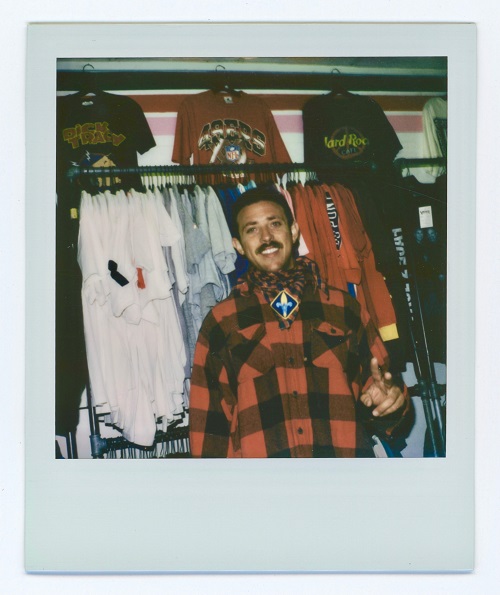 Street fashion has been a key element in Hip Hop since the 80s, and in today’s underground that element is as prevalent as ever. With the resurgence of lyrical street rap recapturing the essence of Hip Hop’s Golden Age, the demand for high quality fashion wear has never been higher: Bring in Mark Rosado of Top Shelf Premium. Mark runs a vintage clothing store called “Vintage On First” in Hoboken, New Jersey. Being a lifelong fan of Hip Hop, he has transformed his store full of rare streetwear and Hip Hop vinyl and cassettes into a hotspot for both established and up-and-coming MCs. With their 6th Season currently underway, Top Shelf Premium’s “Off Top” freestyle series has helped bring some of the best spitters into the awareness of countless Hip Hop Heads, including media legend Peter Rosenberg.

Not only has the “Off Top” freestyle series provided fans with footage, but Mark has taken the shopping experience he experts in and combined it with a live concert with “Supply & Demand.” An all-star lineup of MCs combined with a marketplace full of vendors where fans can purchase merchandise from and interact directly with the artists performing. “Supply & Demand is returning July 3rd of this year in Brooklyn” Mark exclaims.

The experience that is “Supply & Demand” is a special one, take it from someone who attended its inaugural show back in August 2019. As producers such as Sadhugold play beats live, vendors such as Classic Material New York, Guttah Wear, and just about every MC on the ticket have merch tables set up in the marketplace during the afternoon before showtime. Supporters can come through and cop gear directly from the artists themselves, chop it up with like-minded people, grab a beer and even something to eat from one of the food trucks parked outside. After the marketplace closes, everyone can then enjoy a who’s-who lineup of some of the illest MCs in the underground performing live. After the successes of the first two events, and live music coming back after the pandemic, “Supply & Demand Vol. 3” is the place to be in NYC 4th of July weekend. 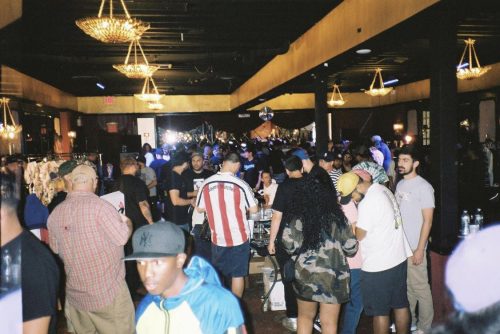 Mark has been in the business of selling vintage clothing for almost a decade, “I was selling vintage clothes as my hustle, it still is my hustle. That was my style, being different. Everyone was rocking GAP, you know? Mall shit. I lived all over, Fort Lauderdale, Santa Cruz, I lived in Spain, I was just kind of like a drifter. Through all of that, I was going to Flea Markets just buying random shit. Around 2012 I moved back to the New York area and all I had was my clothes. I ended up throwing up this Raiders hat on Ebay, and it sold for 50 bucks. I had bought that in California for like 2 dollars. So I figured I’d start posting more shit. My first real experience was in the Lower East Side, there was a Flea Market. I brought out racks of my clothes and my first day I made 1000 dollars. People were just into what I was picking. It was a high. So I reinvested my money, went back into the field and bought more clothes.” 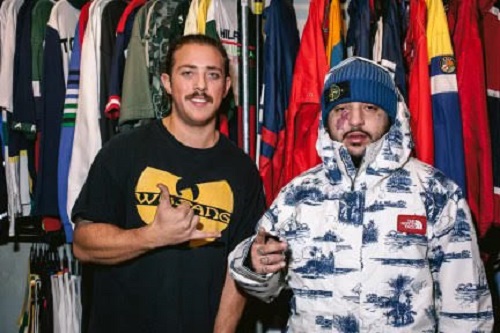 What really shifted the paradigm for Mark was a trip to a sneaker show in DC. Being one of the few guys selling vintage gear at the event, he was approached by a rep for The Source Magazine with an offer to wardrobe a new emerging artist with a thing for thrifting named Macklemore. “So I pull up to the studio, this is Macklemore like right when ‘Thrift Shop’ popped. I put him in this crazy fur coat, and he was so cool and appreciative he put my name on Instagram. That day was my real introduction to being the guy that was providing wardrobes for Hip Hop. And that snowballed into working with RiFF RAFF real heavy. Me and him hit it off, I was going to shows wardrobing him and helping make him the Neon Icon.” 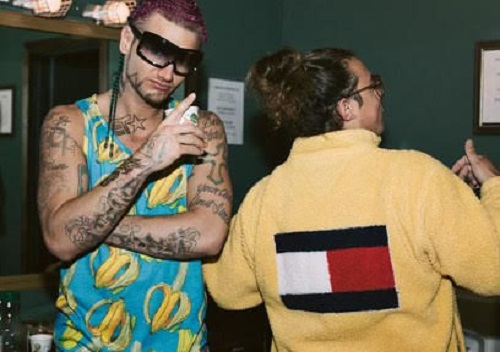 Mark ended up renting out a space in the back of a high-end women’s boutique in the heart of the Lower East Side. “You go into this fancy women’s boutique and in the back it’s fucking Hip Hop. All these crazy rap tees and shit. Guys like Retch, who was the Polo king at the time, and Dza would come through, A$AP Rocky. Then Joey Bada$$ came through, this was around the time ‘1999’ had dropped. We ended up hitting it off and he brought me on tour with him, wardrobing him and everything just evolved from there. I wanted to keep my vintage theme, and so I was bringing around this VHS camera to all these spots, just filming shit. One thing just clicked in my head, like, ‘why doesn’t someone rap in my shop on this vintage camera?’ And that’s where ‘Off Top’ started. Now 6 seasons later, we have over 70 episodes and it kind of speaks for itself as its own brand and platform. ‘Top Shelf’ has become ‘Top Shelf’ because of that.” 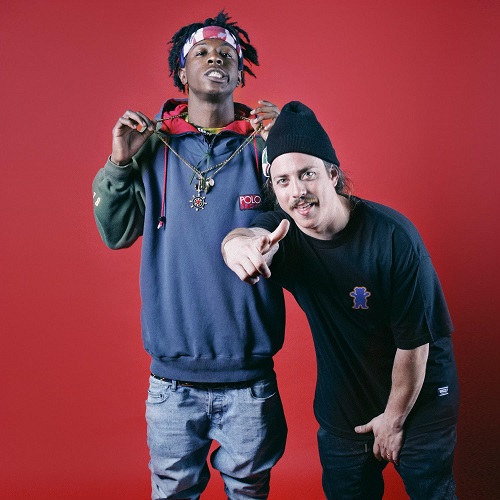 After building “Top Shelf” as a brand, and creating a unique platform to showcase up-and-coming MCs with ‘Off Top‘, Mark connected with Peter Rosenberg. “I was going through doors with all of these artists, and that was my thing, I’d pop up backstage with vintage gear. I knew Peter was an old-school Wrestling nerd, that is his thing. So he was hosting a Pay-Per-View Wrestling event at this bar and I hit him up. I ended up chopping it up with him and gave this RAW sweatshirt and he loved it. We became friends from there. So I ended up working his merch tables, you know? We just built and built and built. So I started telling him ‘You should bring this guy Benny and this guy Crimeapple up to Hot 97 for your Late Night show.’ That was like the first time that Hot 97 interviewed them. That was 2018, and look at Benny now.”

Being the Hip Hop aficionado that Peter Rosenberg is, he saw that Mark had his finger on the pulse of what’s going on in this current Underground Hip Hop renaissance, and decided to bring him aboard as an A&R for his Late Night show on Hot 97. Mark would introduce him to music from artists like Flee Lord, Eto and Stove God Cooks, and the high quality music they put out gave Peter a sort-of second wind. “Every week I was getting cleans from artists for Peter to play on his show, and then at one point he was so hyped on his show because he was playing Flee and Eto and Crime, and he was like ‘I got the battery back in my back bro, I want to make an album and I want you to be the A&R.’ It’s been a year long process and now that it’s coming together my mind is blown,” says Mark. 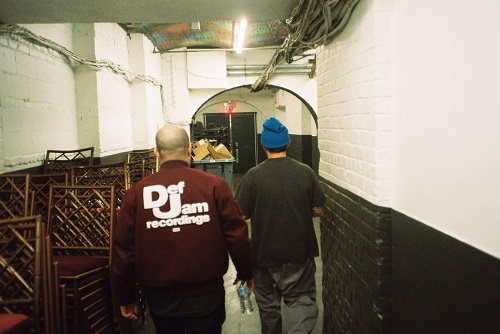 “Real Late: The Album” is set to drop May 21st, fully A&R’d by Mark. Not only are the best of the best from the underground on this project, but the project also boasts features from legends such as Method Man, Raekwon, Ghostface, Westside Gunn, Styles P and more.

With his roots in being a self proclaimed “Flea Market dude,” a successful A&R and a life-long fan of Hip Hop, as mentioned earlier, Mark took each facet of his passions and combined them to bring the live experience of “Supply & Demand” to life. Teaming up with his friend Meyhem Lauren, the two have created one of the most unique live experiences for Hip Hop Heads and creatives to connect. Meyhem even headlined the show’s first installment. “I’m super close with Meyhem, and over the years we’ve been discussing a sort-of sneaker-con slash concert. We were like ”We should mesh the worlds of Hip Hop and the Flea Market.’ And we just put it together. I’m seeing how the merch game in rap is insane, so I was like ‘Yo, let’s bring these artists to a table and fans can come up and meet them and buy their music and merch all in one room. And while we’re doing that let’s have the producers play beats in the background, and then let’s have a concert. Meyhem is my partner in this shit, he came up with the name ‘Supply & Demand.’ I reached out to Peter and he was down to promote it on Hot 97. I just pulled all my resources together and it was something magical.” 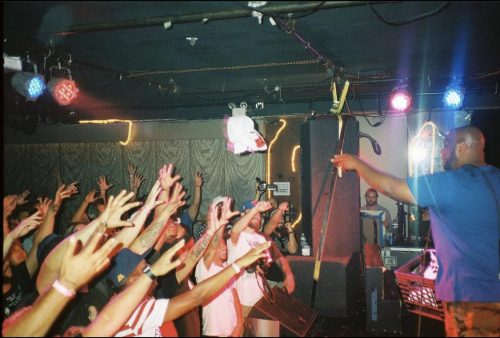 As mentioned earlier, “Supply & Demand” will have it’s third show July 3rd, “Real Late: The Album” by Peter Rosenberg drops May 21st, and “Off Top: Season 6” is currently underway. Not to mention you can stop by Marks store “Vintage On First” on 257 1st St, Hoboken, New Jersey and cop some rare vintage gear, or if you can’t make it into the store, you can shop online at topshelfpremium.net. Mark is an example of the benefits that come with being a genuine person who follows his passions and stays productive, and we can’t wait to see what’s in-store for him, and for Hip Hop next because of him. 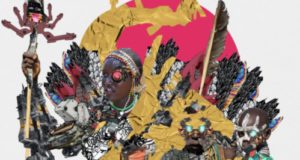 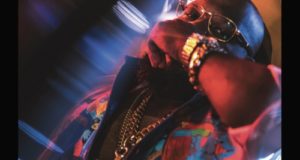 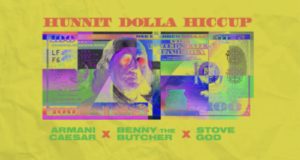